Whiskey and Things Episode 8 - Shot of the Week 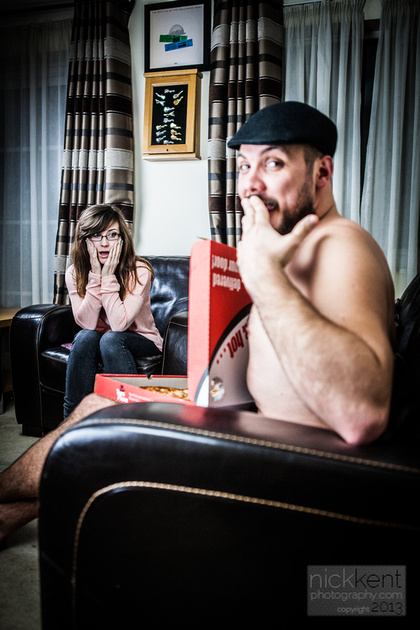 Now, we all have off days, and one of my rules when I started this blog was to be completely honest about my work and the processes involved whether good or bad, and this image will be going in my 'could have been better file', I'm not going to lie. Nothing to do with my subjects, but lack of preparation due to a busy week and one of the busiest days of the year so far.

My challenge for episode seven's shot of the week on 'Whiskey and Things' came from 'FiftyShadesOfDrama' which was to photograph my co-host and friend Dave Giles doing something stupid in front of a girl. Now, we'd both had busy weeks and I knew I was only seeing Dave on Monday (after editing some property work in the morning) to record episode 8 of Whiskey and Things, as well as have a photo shoot for his next EP cover, which also turned last minute into a shoot for a promo music video for one of the songs off that EP, which I also had to record Bass for.... I hope you're getting the impression of how busy this day became. I thought I'd be able to get my shot of him being stupid in front of our wonderful make up artist Emma during the day while we were doing the shoot, where Dave was dressed rather foolishly, but then we decided to keep the theme for the EP cover secret until it's release, so shooting of the challenge had to wait until later on in the day... much later.


With Dave flying to Australia for a three week tour the next morning, we had to shoot something by the end of the day and we were running out of time, daylight and heat (it was freezing and dave doesn't like to wear shoes... I know right!?) So my ideas to do something outside like `running with scissors', `crossing the road on a red man' where out of the question so we started shooting some things inside which to be honest were pretty `lowbrow' and for maybe the first time ever, I allowed Dave to delete the RAW files from my camera, never to be seen again... well maybe except one.

After a long day with options running out we thought it was time to get some pizza in which gave me the idea for what you see above, implying that Dave may have been a little naughty with the pizza box and a pair of scissors, which can be considered stupid because you should never risk melted cheese near your `gentleman's agreements'.... That's not coming from experience, just common sense. I wish I could have implied Dave's nudity a little more but I'd seen a little too much of that already for one day.... and that's a story for another time. Emma is looking suitable shocked by the contents of the pizza box and I hope her expression implies that there may be an extra ingredient on her pizza she didn't order.... especially as she's a vegetarian.

If you're at all interestested, this was image was shot with a 24-70mm f2.8L @ f2.8 with some soft boxes for illumination which were already set up for filming... nice and simple.

So, I'll admit, not my best work, but I'm glad I delivered something and didn't miss my deadline, sometimes you just have to shoot something and hope you can polish it up later. Please keep your challenges coming in and I promise next week's photo will be more classy, arty and technically interesting. Be sure to tune in to Episode 8 of Whiskey and Things to find out what I'll be photographing next week. Thanks and have a great week! Nick.