Whiskey and Things Episode 12 - Shot of the Week 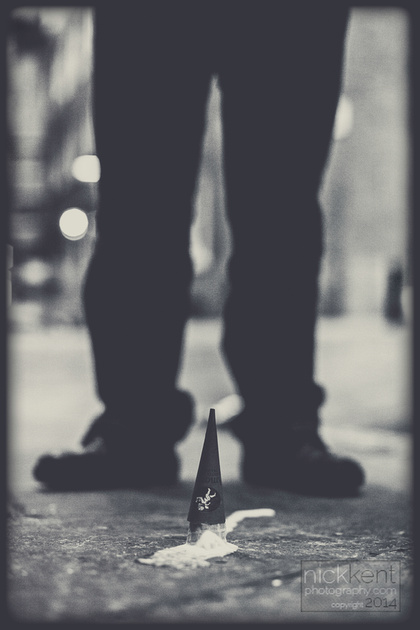 So when my old friend and all round legend Ron McIntyre from Felony Records over in the USA challenged me to photograph a modern interpretation of my oldest memory as part of the 'Whiskey and Things Shot of the Week' feature, there were a few that popped into my head. They were all from the first house I lived in, in Bracknell where we lived until I was about 3 years old I think, back in 1985. Trapping my thumb in the garage door was one, and soiling my He-Man PJ's was another but I wasn't going to attempt to recreate that day.

The one I went for may not have been my earliest but it seemed to be one that stuck with me the longest over the years. It was a Summers day and as with all sunny days the ice cream van was doing his rounds in our neighbourhood so my Dad had bought us both 99 flakes... called 99 flakes for a reason back then I think, because you'd get a penny change from a quid, but please correct me if I'm wrong. Back then my Dad had a blue Ford Cortina which was parked on our driveway, so when he's bought the ice creams he sat me on the boot of his car which was flat, like a bench, not curvy like cars are today... and new proceeded to lick away.

Now as many of my family would back me up on, I was some what of a clumsy child, well, losing three teeth running for a bus recently may suggest I still am, but back then I would go through the knees of a pair of trousers in a matter of hours, so a light and airy whipped dairy product on a stale wafer cone was a risky challenge at best. Within a minute or so the inevitable happened and I dropped the whole cone on the floor... and yes, I'm pretty sure I turned on the waterworks, I was 2 or 3 years old.

So my Dad being awesome and thoughtful as he was and still is, immediately gave me his and shouted to my Mum to see if we had any regular 'soft (bloody hard) scoop' that he could make himself another one with.... there wasn't any. Now this my sound like a pretty uneventful afternoon to many, but that was the start of many, many years of childhood guilt for me. As soon as my Dad gave up his cone for me and had to go without, I felt this horrible feeling that I hadn't felt before, guilt, and I felt that guilt for years and years to come because of this incident, because he'd gone without because of me. It's silly little things like this that stick with us as we're growing up and help form the kind of personalities we'll be in later life. I admit, now guilt comes from far more serious things than an ice cream, but you can read those stories in my autobiography in a few years.

So this image I captured in London while out with my parents on Mothers Day. No 99 flakes around that day so I had to buy some stupidly expensive ice cream from a fancy shop in Covent Garden... £3.50 each for a small cone of vanilla, insane. Anyway it's a simple shot recreating the moment I dropped my ice cream on the floor by my Father's feet and watched it melt and run away along with my tears. Taken with a 50mm lens at about f1.4 I think, nice shallow depth of field and a high contrast, grainy, aged film look to it.

Hope you like it, another one coming your way next week from a challenge to photograph 'both sides of the same coin', be sure to watch the latest episode of 'Whiskey and Things' as well to find out if I've chosen your challenge next week. Thanks for reading.