Whiskey and Things Episode 3 - Shot of the Week

So, already it's time for my second 'Shot of The week' from my web series 'Whiskey and Things' which I host with my friend Dave Giles. Each week we ask our viewers to challenge me to take a photograph by suggesting a theme or brief that I have to work with. The first week I challenged myself to shot a London landmark incorporating the light streams of passing vehicles which you can view and read about in my previous blog. This week I was challenged to photograph 'Three ducks minding their own business', which was a great brief which was broad enough to have some fun with.

My first thought of course, living in West London was to head to Richmond Park which is somewhere I've shot a lot before and I know there's a lot of great wildlife there, but once again, the great British weather was going to make that a misery, and let's face it, as much as ducks can be fun to shoot…. It's what everyone was expecting, so I thought I'd do something a little different.

The brief was 'Three ducks minding their own business' so I started of thinking of places or situations were people have to mind their own business or they're considered rude. Some ideas were sitting next to a couple kissing and not watching, or seeing someones open diary and not reading it, then it crossed my mind that one place where even making eye contact can be considered 'creepy' (unfortunately) is the London Underground…. and what's the most annoying thing you can do on the Underground? That's right, read the paper over someone's shoulder…. The horror of it. So I thought it would be cool to have three ducks clearing minding their own business playing a crossword and one duck committing the offence.

Of course, taking this shot with live ducks would have been impossible (and dangerous if Swans get involved… they hate giving up their seats.) so the only way I could make it work was to superimpose the ducks in the tube train, pretty tricky perspective wise, or simpler (and more comedic) was to use cute toy ducks and have more freedom to arrange them in an interesting way…. which is what I decided to run with. 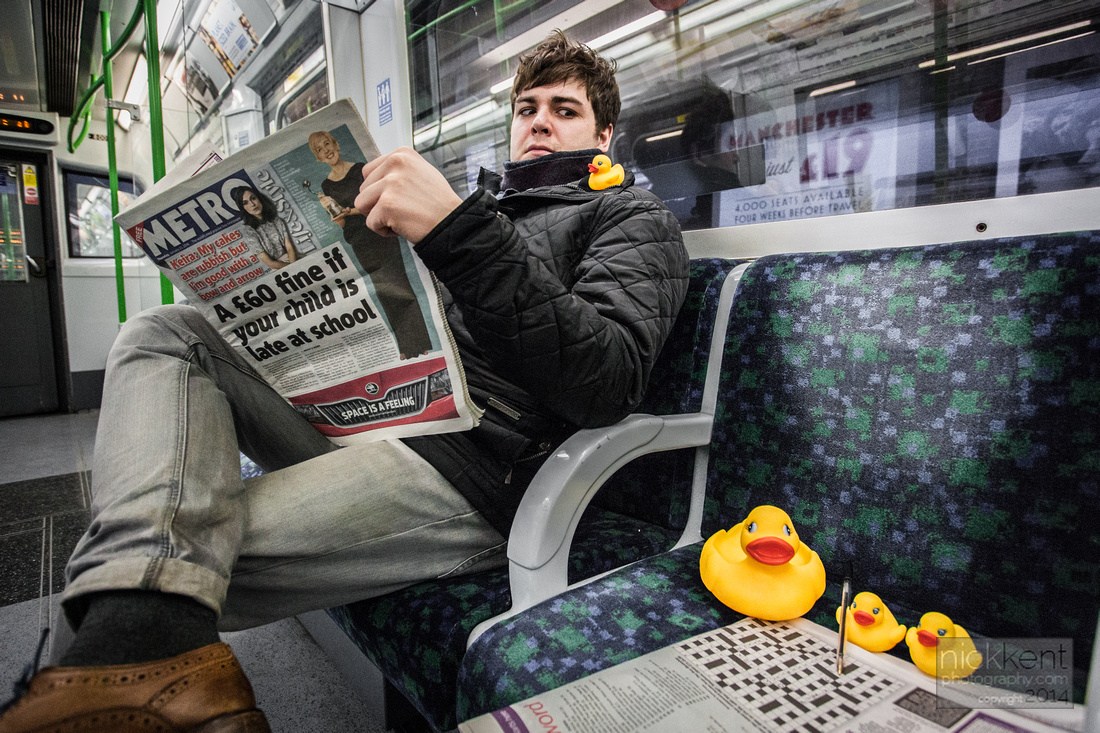 My buddy 'Pinchy' helped me out with this pic which turned out to be fun to shoot, especially as we had a family with small children sitting opposite us laughing at two dudes playing with rubber ducks. Technically it was a pretty simple shot with the 17-40mm f4L again, set all the way out at 17mm with an aperture of f4.5, and even though I was purposely shooting on a train that was above ground for more natural light, it was a gloomy day (of course) so I had to bump up the ISO to 4000 so I could avoid using flash and still keep a rapid shutter speed of 1/250th of a second to get a sharp image.

Lightroom work was also pretty simple, all I did really was straighten the image and desaturate the colour a little, except for the yellows which I boosted a little to help the ducks pop out of the shot a bit more. Some people might have made the whole image black and white leaving the yellow ducks, but I've never been a fan of that…. a little too 'Ikea' for me.

So there you go, Thanks for reading this instalment of my blog, I hope it was educational and entertaining in some way. If you've already watched episode 3 of 'Whiskey and Things' you'll know that this week I'll be photographing 'a million of something', so log on next week to find out how I get on with that one.