Whiskey and Things Episode 2 - Shot of the Week

On Wednesday January 15th 2014, together with a good friend of mine, launched a web series on You Tube. Dave GIles and I started 'Whiskey and Things' for a few reasons: to help promote our upcoming work, to engage with our followers on a new, more personal level and thirdly, which was my main motivation, to better ourselves and stride forward into the new year learning and using new skills. Video editing and shooting is an area that I've always wanted to move into, and thanks now to the Adobe Creative Cloud, I was able to justify purchasing the necessary software….. I just needed to learn how to use it, and what better way than to start a show with one of my best friends, where I have a deadline every week, and failure would mean letting down him, myself and our followers. Nothing like jumping into the deep end for a nice steep learning curve.

I decided I would ask viewers to challenge me to take a photograph each week, based on a imaginative brief, to maybe challenge me to shoot things I wouldn't normally think of. The first shot of the week was actually a challenge I set myself, which was a simple night shot of a London landmark. What a better way to start the year than getting a nice shot of my home city, and I hadn't done any long exposure night shooting in the Capital for a while and it was always something I really enjoyed. I set myself the task of using the moving cars more than I had in the past, to create beautiful light streams.

The weather on the night I decided to shoot on was touch and go but I made the trip out starting in Piccadilly Circus. I'd shot there before and got a shot I'm very proud of which you can see in my London Landmarks gallery, but it was back when the old style 'Sanyo' sign was still up, so I thought I might try to update my gallery with a fresh pic. As with a lot of views in London, scaffolding caused me to knock that idea on the head and move on. After a scout around I ended up in Trafalgar Square, and the heavens decided to open, in style… wonderful.

With no umbrella and no hat, I had to get my shot as quick as I could. I was shooting with a Canon 5Dmk2 which is pretty water resistant, but I didn't really want to test this out to much. I decided to go with a 17-40mm f4L lens to get the widest shot I could, either to fit in the height of Nelson's column, or the entire width of the roundabout I'd set up camp next to. After a few test shots I committed to taking a portrait shot of Nelson's Column. 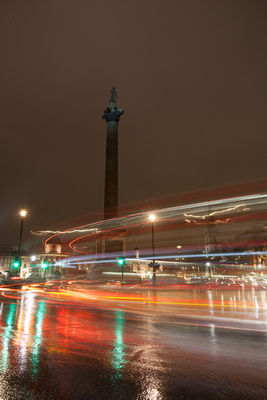 avoid and camera shake from me pressing the shutter…. sounds very cautious I know but even the smallest shake will create a softness in the image. I went down to 100 ISO to help keep the exposure long and set the aperture to f10, which also helped me have a longer shutter time as well as give me a nice long depth of field to keep everything in the shot nice and sharp.

After a few shots I had learnt the sequence of the traffic lights and knew the best time to open the shutter to get the most movement without the cars stopping in front of me, spoiling the nice smooth motion streams I was trying to create. I shot 10 frames in all, settling for a 10 second shutter speed, the last attempt being the one I decided on which you can see above. I managed to time it perfectly so the traffic lights in front of me were green just at the right time to let a bus drive all the way around the roundabout uninterrupted for the whole 10 seconds, giving me long, continuous streams. You can in fact see the bus on the right hand side of the image in the distance, very lucky to get this, but I'm glad I did.

I didn't do an awful lot in Adobe Lightroom to alter the image, just simple white balance tweaks and a blue filter over the top half of the image to make the sky a little richer. I also straightened the image and fixed the vertical distortion caused by using such a wide angle lens, which was at 27mm when I got this image. On the right is the original image with the orange tinge we all know and love, I believe giving this a cooler, blue tint is far more pleasing on the eye. There were a few nice shots from this very short shoot which I've included below, but I feel that the long light streams giving a 'merry go round'/carnival feel was a clear stand out for me. You can find this image in my 'London Landmarks' gallery.

What do you think? Did I make the right choice? Which one is your favourite? Please leave your thoughts below.

Thanks for reading, look out next week for a image of 'Three ducks minding their own business'…. Wish me luck! 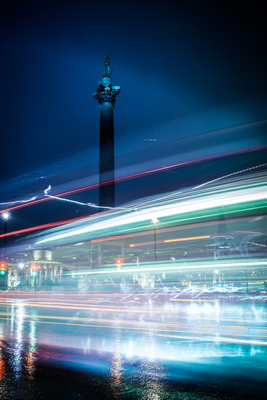 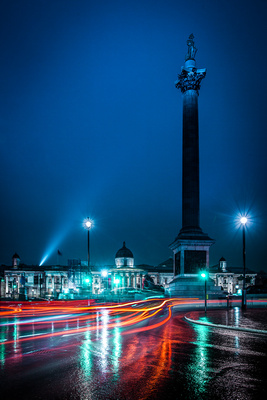 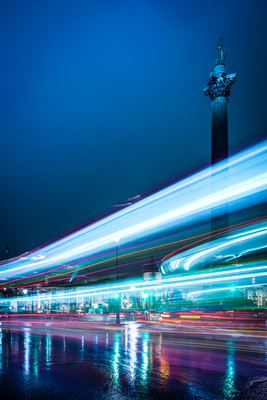