Over the last couple of years since I decided I was going to branch out into Wedding photography, I've been lucky enough to capture some beautiful occasions and work with some wonderful couples who helped make what can be a stressful experience, a joyful and rewarding one. I didn't want to move into this highly competitive field until I knew I had the knowledge, experience and equipment to be able to deliver the standard of photography and service I would expect and see from other wedding photographers I've researched.

Over the next few weeks i'm going to be posting some blogs about my wedding experiences and explaining how I produced some of my favourite work. I thought I'd start off though with showcasing a particularly challenging but surprisingly rewarding task from the bride preparation time of a day.... The shoe shot.

I do love being invited to photograph the morning preparations as it's a nice relaxed way to start such an important, high pressure day, and get warmed up for the big event later on. It's also a great opportunity to get to know the bridal party, including learning the names and faces of bridesmaids, parents and also paige boys and flower girls who might also need to get used to the 'strange man' pointing a camera them.

The shoe shot has proved to be one of the more challenging and often most artistic shots of the day. As well as the shoes I also like to get some shots of any other accessories, which can include garters, jewellery, items old, borrowed and blue as well as ofcourse the wedding dress itself. The challenging part of getting a nice shot of the shoes, as well as other accessories is the fact that the venue is often someone's house I haven't seen before which sometimes can be tricky regarding space and staying out of the way of everyone getting ready. This can also mean that finding a tidy spot of the house (in the nicest possible way) during what can be a manic time can be tricky. This is usually more of an issue when the wedding dress is concerned because I need to hang it somewhere nice but also out of harms way, this is something I'll be covering in a blog in the future.

Included in this blog are four of my favourite shoe shots I captured last year with varying amounts of creativity and difficulty. The main photo above was interesting because the bride asked me if I could include a six pence piece which her grandfather had given to her to put in her shoe for luck. After some playing around with concepts I decided to try and balance one of the heels on the coin, and I'm not going to lie, this shot was not my first attempt, it took a while to get right but it's a cool picture that I think was totally worth the effort.

The three shots below demonstrate how the venue or items of furniture can influence an image. The shot on the left was taken in a large hotel room which had a wonderful glass topped table which I used to get a wonderful reflection of the beautiful red shoes which really pop out in front of the wedding dress hanging from a four poster bed in the background. The other two were shot in clients houses where space was more of an issue, so I opted for using some stairs which gave the image some nice depth, and a furry rug which was being hit by a wonderful beam of sunlight, allowing me to show off the shimmer of the shoes, together giving the image a luxurious look.

For more information on my wedding services follow this link and if you have any questions at all please email me at via my contact page. I hope you've enjoyed my favourite shoe shots, keep an eye out in the near future for more wedding related blogs.

Have a great day. Nick. 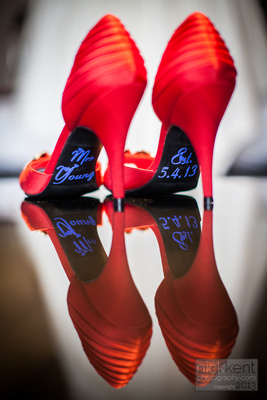 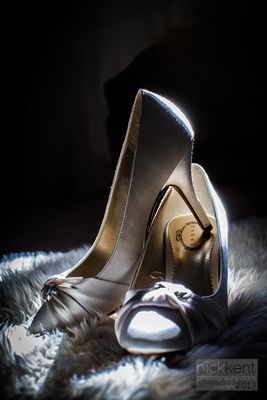 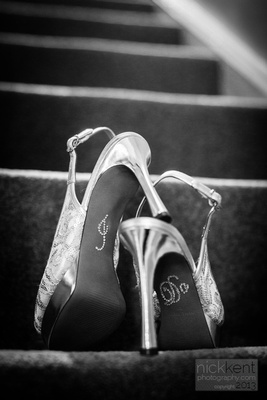